This prevailing “we need to wake more people up” attitude of the truth movement is, in my opinion, an inherently stagnant mindset that can only amount to us spinning our wheels until our inevitable defeat. 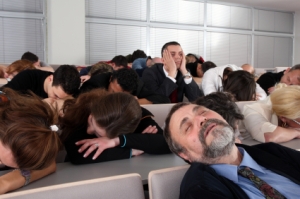 People seem to have this idea, that as soon as a certain amount of people wake up things are automatically going to fix themselves. Well that’s not how it works. Only a small percentage of any population is endowed with critical thinking skills. Society could not function otherwise. It is up to the small few that can think to lead a nation, or the revolution needed to fix one. This isn’t to say that we don’t need to spread the message as far and wide and as often as we can – that is given. This is about the mindset that is essential if we want to achieve victory.

In fact, I would be happy if I never heard “we need to wake people up” again. Forget about your neighbor, forget about your stubborn buddy at work and your family that thinks your crazy. Even if you get them to listen, their response will most likely be “well there’s nothing I can do about it” and there is validity in that kind of response. It takes a special kind of people to even have the moral courage to face the truth, let alone act on it. The reality is that people are waking up everyday and with the current attitude all that is amounting to is more people joining the “we need to wake people up” crowd instead of finding what would be a much healthier mindset of “until we organize we are no better than the sleeping masses, in fact, given that we know the truth, we’re probably worse.”

The concept of “waking people up” leaves three glaring questions that I need answered:

Learning is always going to be a continual process, but sitting around endlessly analyzing the problem isn’t going to fix anything. Once Hitler diagnosed the problem he took action. He had already been in the streets trying to rally the people behind him for two years before “Mein Kampf” even came into print. People are going to wake up at their own pace, usually only due to extreme circumstances that directly affect their lives. History, as well as the present proves this observation correct, so we can quit holding our breath waiting for some grand awakening. We have enough truth now in order to move forward. We understand who our enemies truly are, the tactics they use, what they’ve done to our culture, our heritage and our history and what they have in store for us in the future. Who’s going to stop them if not us? There is no other option.

Once again, did Hitler take back Germany by sitting around on the internet? Here he explains his attitude after recognizing the threat facing his people:

“That is the problem which I concerned myself and explains why I started this fight; but now gentlemen perhaps you will ask: What were my chances of success? And here I can state unequivocally: on the day when I, for the first time, stood in front of my followers, that day upon which I followed through with deliberations, defined the concept of National Socialism itself, and laid out my thoughts to them – on that particular day I was convinced that I would become the Fuhrer of the German Nation in the future; I never doubted for a second that someday I would become the leader of the whole German Nation.”

So no more of this endless banter about “waking the masses” and no more falling into Jewish traps and ridiculous arguments about “khazars,” or “zionists” or the ”fake Jews”, or stating the obvious with pathetic disclaimers about “not all Jews are bad”. I for one am getting fed up with this Hasbara technique of pretending that we automatically are talking about all Jews every time we expose the crimes of the fellow tribesman. I say if they want to insist on being judged as a group so bad then fine here it is: as a group, you people suck.

Refusing to state the obvious or call a spade a spade is a weakness and will be viewed by the enemy as such. Joseph Goebbels understood this when he wrote these now infamous words in 1929:

“The Jew is immunized against all dangers: one may call him a scoundrel, parasite, swindler, profiteer, it all runs off him like water off a raincoat. But call him a Jew and you will be astonished at how he recoils, how injured he is, how he suddenly shrinks back: “I’ve been found out.”

And I don’t want to hear the lazy and demeaning ad hominem of “Hitler-worshipper” either. This seems to suggest that we look at him as a god and that his work is the be-all end-all as opposed to simply the best reference point that we have. A biologist doesn’t start from scratch to try and figure out life his own way. A philosopher doesn’t invent a new language to think in. They study the work of their predecessors and expand on it the best that they can.

I have yet to hear one solution proposed by anyone in this so-called truth movement that holds any water whatsoever, and yet you’re telling me that we shouldn’t be looking diligently at the one real truth movement in history that literally almost saved the world and solved the Jewish problem? Attempting to “disconnect from the system,” handing out fliers, protesting, and of course, trying to “wake people up” are all good things, but they are not going to save us. Studying the movements of the past, successes and failures alike, and learning from their mistakes and accomplishments is the only logical way forward.

I’ve drawn quite a bit of inspiration recently from a fairly new, well-informed and well written political think tank called Total Fascism. In a recent article written about the radical and revolutionary spirit and approach that we must take on, he writes:

“A timid approach cannot possibly work.  We will not win the support of the thoughtless masses, or even the revolutionary-minded minority, by attempting to placate or by softening our message.  Nor shall we win by allowing Jewish concepts to remain within our ideology…..

All of this must be declared fearlessly, our bodies, minds and souls devoted to a complete reversal of the entirety of the social, political and economic order. Once we declare it, we shall become it, and once we have become it, it is then that others will follow our lead.”

As long as we are in agreement on the key points, we can band together as a cohesive and unshakable force, despite of our inevitable, minor differences. Then when our natural leaders start emerging from the rubble of this decaying civilization, they won’t just find a bunch of disgruntled patriots whining about the Jews but will instead find an army, ready and willing to go into action at any moment, to stand up and to take our world back.

We have awoken….now it’s time to fight!